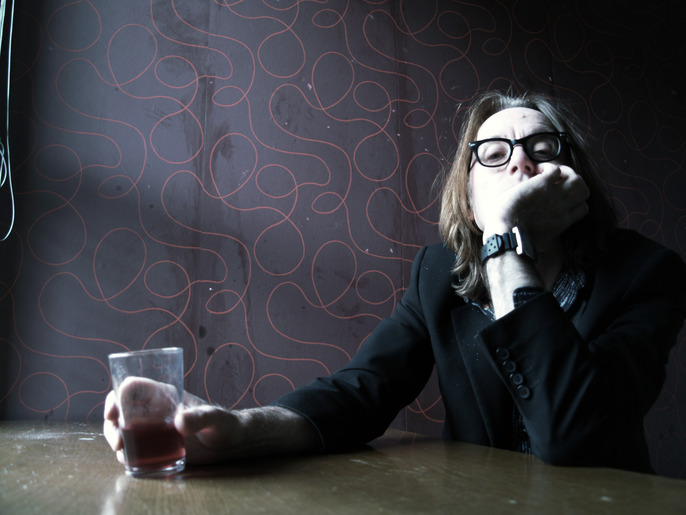 Vinny Peculiar can be best described as one of British pop music’s most cherished hidden treasures. A singer songwriter with a difference, a poet and an observer of the everyday minute, a creator of poignant vignettes, mini stories and always intelligent observational and insightful. His work has a historical contest and often embraces childhood memories’, he makes absurdist observational thinking the norm whilst standing ordinary life on its head. This is the guy who’ll be found by the masses in one hundred years time and he’ll be hailed as a genius.

He is respected within the pop music fraternity as one of Brit Pop’s founding fathers and holds court with many of Pop’s gurus from The Smiths to Oasis. Vinny has recently toured alongside Roger McGuinn (The Byrds), Ricky Ross (Deacon Blue), Graham Gouldman (10cc) to name but a few. Vinny’s band members have included former members of the Smiths (Mike Joyce, Andy Rourke & Craig Gannon), the Fall, Aztec Camera and OASIS.

He formed ‘Parlour Flames’ with Bonehead (OASIS) in 2012 and their acclaimed eponymous debut was released May 2013. He has worked as a compere on the Glastonbury Stage and has toured with Luke Haines, The Killers and British Sea Power to name a few.

‘’The World According To Vinny Peculiar’’ is a night of nostalgia tracking the innocents of adolescents through to the sometimes hellish prospect of having to become an adult. We’ve all been there! The songs, words and poetry, based on his own life experiences, eloquently recount life scenarios we’ve all walked through, that’s a guarantee! Vinny trades these scenarios back to us in a way only he could do! Revisit your own life’s blips and highs across the sixties, seventies, eighties, nineties and beyond. Recount your own youth and your impending dotage…remember the great times and… SMILE!

How did you first get started in music?
My father was a church organist and my uncle a jazz musician so music was always around when I was growing up, I played in the school orchestra, then came bands and writing…

When was the most outstanding point where you thought, I’m now being heard?
Playing Glastonbury Festival is always a highlight, and getting a song played on the radio, both memorable landmarks..
Who are your music icons and influences?
David Bowie’ – I saw him play ‘Starman’ on Top of the Pops in 1972, he looked and sounded like a alien from space and I was instantly hooked. His albums remain on rotation in any VP playlist – ‘ She wants my honey not my money she’s funky thigh collector living an electric dream’ is quite a lyric, outrageous, glamorous, decadent…
Simon and Garfunkel were my first musical crush, ‘Sounds of Silence’ ‘Bookends’ and of course Bridge Over Troubled Water ‘The Only Living Boy in New York’ is in my all time top 5, so beautiful…
Ray Davies and The Kinks are my third choice, I loved the Kinks  concept albums of the 70s, such a brilliant story telling lyricist, the sheer volume and quality of the back catalogue is astounding, and of course he wrote ‘Waterloo Sunset’ amongst many other classics…
Have you been on social media?
I have been on social media, it can be useful yes…I try and keep up with the tweeting and bleating but I don’t do it nearly as much as I should do, I find it a little embarrassing to go on and on about how great I am, and how I want people to like my page etc etc
Do you feel that your message has been expressed through you work?
I don’t have a message I just have a voice, and people are welcome to listen,
Looking at your music journey so far, what would you most want to be remembered for?
I have no great need to be remembered by anyone other than friends and loved ones, but  if people like the songs thats a nice bonus, if they listen to them when I’m gone even better…
Looking forward, what will you be doing I your music to make it the most memorable experience?
I’ve been writing a stage show based on my songs, and a concept album based on my work in mental health institutions, it seems to be going well and is a new challenge for me…
How does your music contribute and effect your music culture?
My songs are like snap shots of my life, little stories, they have a linear narrative quality [so I’m told] – as for cultural significance you tell me…I’ve no idea?
Virtually Pop – Music Management Group
www.virtuallypop.com
Twitter: @rumoursfm
Facebook: Rumours Of Fleetwood Mac Official